From Cumulus Wiki
Jump to navigationJump to search

This Wiki page provides a brief introduction to SQL, and describes the settings that define how CMX functionality is controlled.

Why are Cumulus settings now split between several Wiki pages?

The basic answer is because there are a lot of settings, some get changed, and more are added as Cumulus develops!

MX has been developed very dramatically by Mark Crossley:

All the pages, previously called "Cumulus.ini", can be found from the owning category. The original page was preserved at Cumulus.ini_(preserving_history) so look there for its editing history. That page also expands on the above summary of why that old page was replaced.

SQL is an abbreviation of "Structured Query Language", SQL is structured in the sense that keywords have to appear in the correct order, and there are rules about which words are mandatory.

SQL is a collection of languages. Each variant of SQL has a vocabulary and set of rules that are specific to that database server, although there is a sub-set, that is set by "ANSI", of words (and constructions) that all SQL dialects should obey.

How does MX use SQL?

MX uses SQL when updating a SQLite database (see Cumulusmx.db and Diary.db, that type of database stores data in what is known technically as a sequential file. In a sequential file, the data appears as a number of lines that have to be stored in order (by row number). Because entries can be deleted, not every possible row number has to be present, but new entries are appended at end. The various fields (or columns) are named, it is possible (but rarely done) to change the order of the columns, rewriting the entire database file. In a retrieval query you can sort ascending/descending on value in any column. You can select a row by specifying content, but that gets translated into a row number to actually determine the row that is updated.

MX also uses SQL when creating, or updating, a relational database type. The commands issued by "MySqlConnect" software work with two types of relational databases, MySQL (commercial software by Oracle) and MariaDB (free software from an independent provider). A relational database also uses the row, column, and field terminology; but there is no control over the order in which rows are stored, there is an order for columns (although you can change the column order), and rows are identified by a unique key (known as "primary key" as a row can contain a secondary key that links to data in another table). Any retrieval query can specify that what is returned from that query should be sorted in an ascending/descending order of the value(s) in specified column(s).

How does MX use MySqlConnect?

MySqlConnect is used by both CumulusMX.exe and ExportToMySQL.exe, but the latter only works with two of the default tables (those called "monthly" and "dayfile", or as renamed by the user).

Both "CumulusMX.exe" and "ExportToMySQL.exe" make use of the following settings:

The My SQL settings page in interface

MX controls settings for the relational database tables on a page called "MySQL settings" although you may be using "MariaDB". Here is a screenshot of that page (with all sections closed up) as applicable from release 3.20.0 (build 3202): 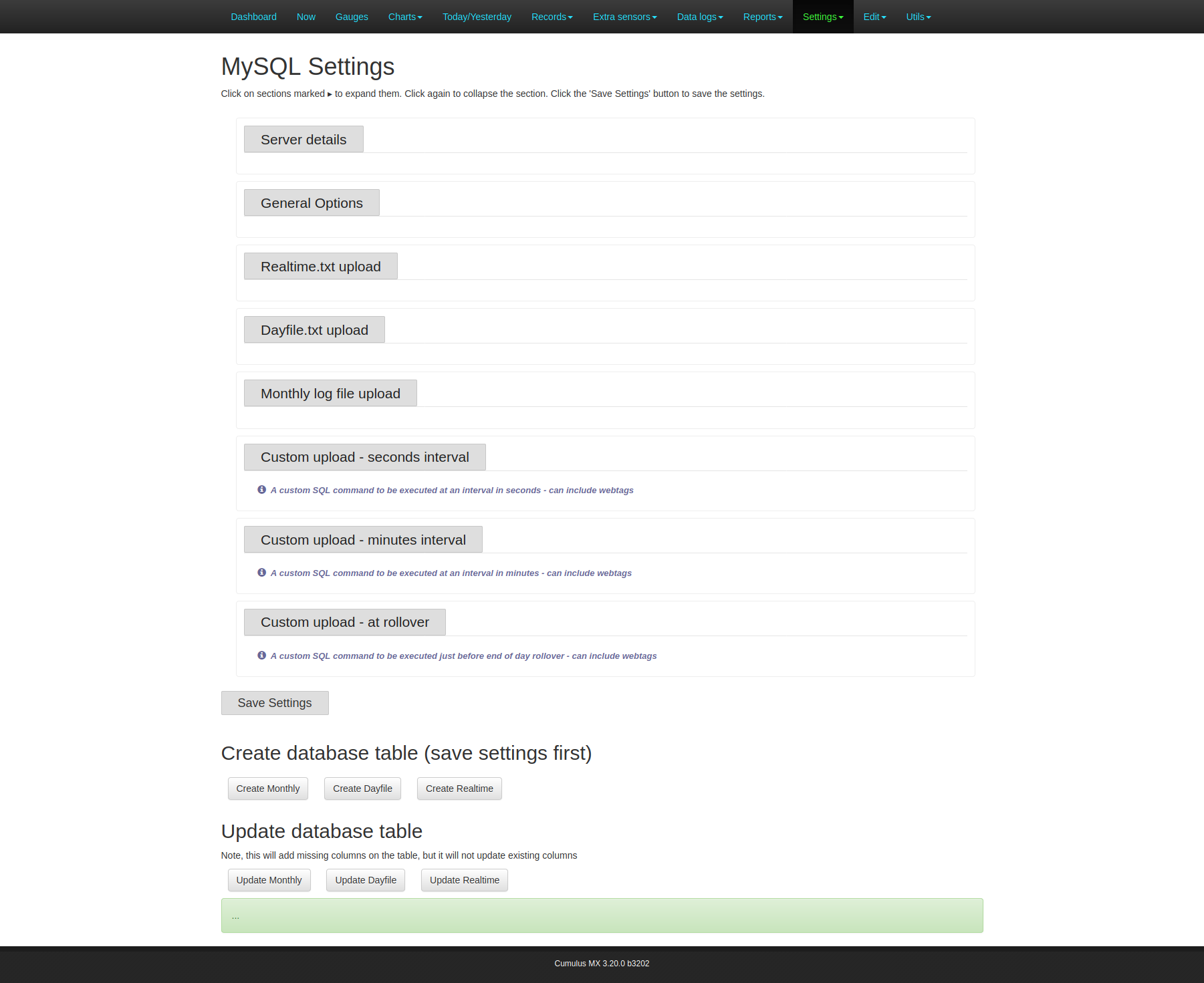 Please note, the text included elsewhere on this Wiki page may be for different release.

This Wiki page was created 20 August 2022, by doing a "cut" from the Cumulus.ini page as it had existed prior to then, and a "paste" onto this page.

This document is 'Work In Progress' so content may not be complete.

Request for help from Wiki Readers

If you plan on contributing to the Wiki, then you will need an account.

Please be aware that information on this page may be incorrect.

Whether this page reflects the latest MX release, depends on whether there have been any further developments, and whether any contributor has kept this page up to date.

Introduction to the 6 SQL update options

There are three default tables (by default called "realtime", "monthly", and "dayfile"; although these names can be changed by the Cumulus user) where Cumulus determines the schema (what columns appear in the database table)

For the default tables, every MySqlConnect command issued by MX specifies column names. Some MX releases add columns that were not present in earlier MX releases, and these releases should provide a utility that will add the extra columns to existing tables. The commands generated by CMX will fail if all named columns are not present in the table.

You must define how to access your database server, enable the particular table and indicate what the table is to be called first. Then you must click Save settings so all those details are registered before any create command will work.

For each default table, MX provides a button which (after database server details, table name and other settings have been saved) can send a CREATE table_name command to your database server. If a table with that name already exists, or certain other standard errors happen, MX can give you feedback. MX will also tell you when the SQL has worked, and the table has been created.

Note that as MX names the columns in any commands it generates, the named columns can be in any order in the table. The default order (as named in CREATE table_name command) represents when the relevant derivative was added to the corresponding Cumulus file. If you have the knowledge of the SQL command required to, or can use a tool (such as PhpMyAdmin) that provides a user-friendly interface to do this, reorganise column order; then you can collect all wind-related columns together, all rain-related columns together, and so on, or simply put what you regard as most important columns before others.

Some release announcements for MX mention that extra columns have been added to a particular table. A script may be provided (either in release announcement, or in the MXutils directory within the download, that you can run to add the extra columns. For example b3089-AlterMySqlTables.sql was provided in the MXutils directory with build 3089 to add the Feels Like temperature columns

Release 3.20.0 as seen on screenshot below provides buttons (under heading of Update database table) for each of the default tables. The code here is rather crude, it counts the number of columns currently defined in the table (does not check what names those columns have, nor what properties those columns have) and compares against number of columns that MX can automatically insert/update at that release in that table. It assumes columns appear in same order as the fields in related file, and modifies the table to add the extra columns in the correct position to match the respective file.

(If a Cumulus user adds extra columns to a default table, those extra columns must be defined with null as default value, so MX can ignore them, but the columns can be in any position).

Populating rows that do not exist

Use the utility described at Software#Export_To_MySQL for monthly or dayfile tables.

The only way to populate realtime is via the action described in settings page description.

The options provided in the Data logs menu of the interface can be used to edit a single line of a file, and there is a setting that lets that edit also update the corresponding single row of a default table.

To update one or more columns in multiple rows, you need to generate a succession of UPDATE queries, keeping the text to send to the database server as short as possible.

One way to do this is to open the relevant file using a spreadsheet (e.g. Libre Office has a "calc" option, this is free and available for most operating systems). Create an extra column after existing columns in the spreadsheet for the "primary key", you should be able to generate this from the first one or two columns of the spreadsheet with some manipulation. Now "Hide" all the columns except those with data that you want to include in the update, and the primary key column. With some spreadsheet skills (see https://cumulus.hosiene.co.uk/viewtopic.php?p=165767#p165767) you can generate the required SQL in this format:

Alternatively, if you have skills in a script language like PHP Hypertext Preprocessor (PHP) you can write a small script that reads the file within a loop, picks the fields required from the line of the file, and generates the SQL (as above), and after ending loop closes file and sends the SQL to the database server.

MX can run SQL (using MySqlConnect commands) that work with Oracle's MySQL, or the MariaDB, database servers at one, or more, of three intervals (MX calls these "custom seconds", "custom minutes", and "custom rollover").

You can enable/disable individual settings, but the mechanism is not designed to do any one-off actions like creating the custom tables.

The Cumulus user can create any number of custom tables, where the user chooses the "schema" (columns in the table). At each custom interval, actions can affect any number of these pre-created tables; and in fact you can define several commands to run in succession against any one table.

The custom table options in MX require you to specify the SQL in advance of it being used.

This means you have to predetermine all the SQL you might use (conditionals can be included to decide what queries actually get executed if there are alternatives).

WARNING: The SQL syntax for "My SQL Connector" used by .NET and therefore by MX, differs in various ways from the Oracle MySQL Client or MariaDB syntax.

Here is an example of what might be input as "predetermined SQL", showing how you can use conditionals and web tags:

From MX release 3.21.1, the INSERT and conditional can be defined in separate command boxes on the settings page.

The settings described here are held internally (stored in RAM) while CMX is running.

If you click Save settings on the Settings → MySQL settings page, then the settings are also stored in a file called "Cumulus.ini".

The file is divided into "File sections", each File section name is on a separate line (with no other content) and enclosed in square brackets (e.g. [MySQL]).

These File sections can appear in any order, MX has a default order set by the order in which the sections appear in the code that writes to the file.

If you prefer the File sections in another order, you can stop MX, and then rearrange the file section order. On restart of the software, MX will still find them, although it may spend more time searching! However, some MX releases discard existing file, and create a new file, so then order will revert too what MX chooses.

Within each File section, there are parameters. Each parameter is in format Attribute=Value, and appears on a line to itself.

The parameters, within a File section, can be in any order, by default new parameters are appended at end of the relevant File section.

Steve Loft recommended that the user sorted the parameters alphabetically, this was because the file used to have to be edited manually as many settings were not included on settings pages. Having the parameters in alphabetical order made it easier to find what to edit, and to check a parameter did not appear more than once, as Cumulus ignores any duplicates. Now all settings are controlled by the interface, CMX determines the parameter order.